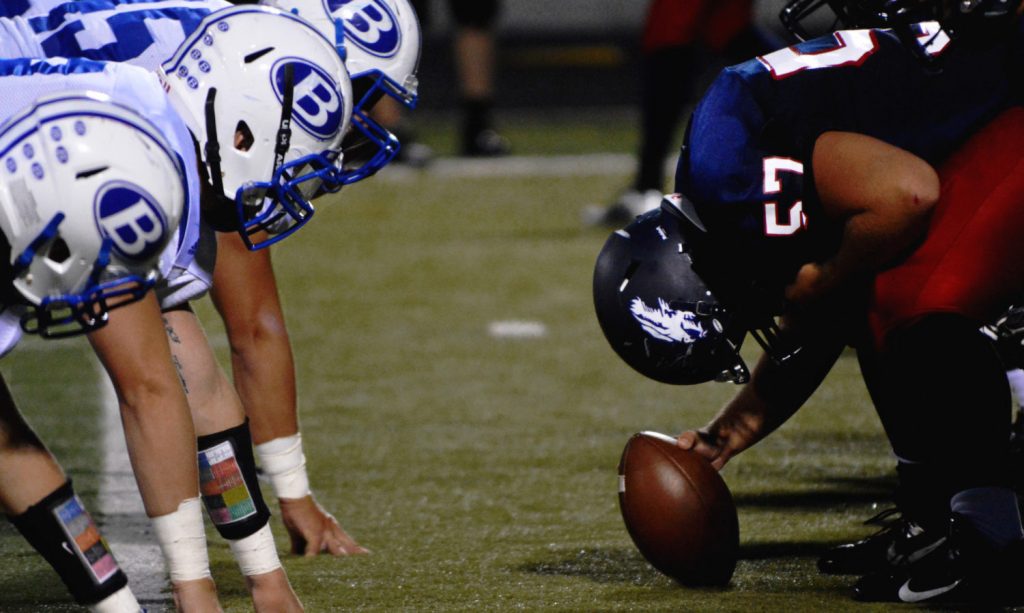 The reason we have survived and thrived for so long is that we evolved. It is has allowed us to exist on this unforgiving planet for so long. In the same way, it is how businesses survive. They find new creative ways to get their products ahead of the competition. However, it is not that easy. Human beings can be quite fickle. For instance, a plan that worked five years ago will not yield the same results today. As a result, marketers have to work hard to look for new ways to keep their younger generations interested in their products. The need to attract customers has led to the creation of the concept of gamification advertising. The term itself may be new, but the concept has been around for ages. Gamification ads allows the company to interact more often with the customers. As a result, they can place their newest products in front of the customer with ease. Some companies have taken this concept to the next level. Let us examine a few of the Dynamic banner ads in games. 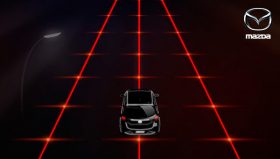 When Mazda launched three new models in 2015, they knew getting market interested in their products would be a challenge. One of the products for which they needed a great digital campaign was the Mazda2. It is a supermini car that is quite fun to drive. However, they need to ensure they could get customers to be interested. The main concept of the game is to ‘Challenge The Night’. The game was made available on digital and mobile platforms. The game starts out as a car ride. However, as players move on, an interactive game phase allows them to explore the car’s various features. It is a fun way to ensure that players get to learn more about the car. When a player demonstrates they can maneuver the car with great skill, they stand a chance to win great rewards. The game is available on Mazda’s website. A number of statistics indicated that the game was a major success. It received an interaction rate of more than 3%. The normal rate for the automotive industry is 0.5%. In addition, there were over 78% user replays for this game. It a good game ad example that utilises both fun and real world rewards.

The ad is quite simple. It is based on a wrecking ball concept. The concept itself is based on a song that was released a few years ago. US Cellular is one of the largest phone companies in the United States. They recognize that they needed to engage their audience in a better way. As a result, posting an interactive game advertisement is a great way to engage the audience. The wrecking ball reference is especially relevant to young people. It is in reference to a song released a while back by a popular pop singer. 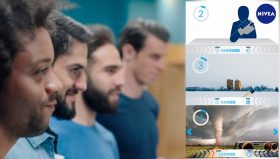 The Nivea ad produced by Digitaland team is one of the ads to rely intensively on gamified banner ad games. Although the ad itself is quite simplistic, it is quite fun to play. The company launched a number of related games based on this concept. Although gamified banner ads are effective, combining them with a video is even more effective. The Nivea ad starts as a video of five soccer players. Most football fans will easily recognize them. The video is about these superstars partaking in an arm wrestling match, which they win with ease.
When the video is over, men are encouraged to play their version of the arm wrestling. It is done via a game, where a player taps on the screen rapidly to win the contest. In addition, the game encourages players to participate in other macho activities. For instance, they can chop blocks of wood or escape flying debris from a hurricane. Besides playing the game, users get to explore other products made by Nivea. It is a clever way to introduce users to Nivea’s products. 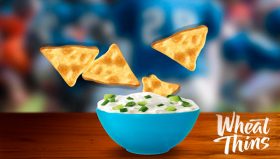 The Wheat Thins ad is one of the most creative advertsing ever. The player is presented with cracker chips falling out of the top of the screen. All that is needed is for you to fill the party ball with as many cracker chips as possible. The chips appear to increase slightly in speed as game play proceeds. Players have just nine seconds to play the game. After the game is over, one is presented with a page displaying Wheat Thins latest products. It is a clever way to place the products in the player’s face while giving them a reward. In addition, if a player wants to best their record, they can play the game again. Ideally, you could play this game all day, while Wheat Thins take the opportunity to highlight its products at the end of each game. 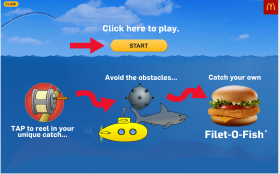 McDonalds launched the advertisement in an effort to catch the attention of online gamers. The Filet-O-Fish was among McDonald’s first products. The web-based game is an easy way for gamers to interact with McDonald’s products through their banner ad games. As a result, next time they visit a McDonalds’ joint they would remember to order the product. The advertisement was the brainchild of Moroch, an advertising agency. However, it was only made available in limited markets where McDonalds’ Filet-O-fish sell well. The aim is for the player is to last as long as possible without being caught. You are given a Filet-O-Fish sandwich, which you protect from hungry sharks inside a tank. In addition, you must avoid touching the walls of the tanks. A number of codes allow you to unlock higher levels in the game. After each game, you can view how high you rank. 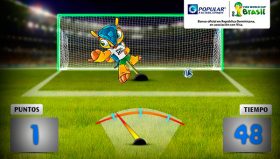 BancoPopular is the biggest banking group in Spain. The bank was looking to reach out to its Spanish customers while at the same time being relevant. The biggest even at the time was the FIFA world cup. Spain is a soccer-loving nation. Any advertisement that incorporates soccer is sure to get many hits. The player is presented with a soccer ball and a shifting gauge. The gauge, which moves from left to right, indicates where the ball will land between the goal posts. Between the goal post is a mascot who moves from left to right. In order to score, you have to hit the ball just right to avoid it going out of the posts or being caught. Each successful shot is rewarded with a point and applause. Although the game is a bit difficult to play, it is also quite fun. It is a challenge that will keep genuine soccer fans glued for ages. It was a great game ad example for riding on the popularity of real world events. Within the gamified advertisement, there are social media links, which you can click to learn more about the organization. All the instructions are in Spanish. However, the user interface is quite easy to understand.

Users of Twitch were recently in for a treat. The game developed by Kargo allowed players to control what a man did in the woods, camping for three days. The interactive stream had more than 2.3 million viewers. The victory was not just for Twitch but for P&G too. The company sponsored the stream in order to promote its Old Spice brand. As a result, viewers were glued on to the interactive gaming while passively receiving an advertisement from P&G. P&G is the world’s biggest spender on advertisements on earth. Although e-Commerce accounts for less than 5 % of its sales, P&G estimates that online marketing influences half of its purchases. After the success of the Twitch live stream ad campaign, P&G has decided to produce more gamified ads.

Gamified banner ads are the next step in the evolution of advertisements. The concept is quite popular in large corporations. They are always coming up with creative ways to keep their employees motivated at the workplace for Decreasing employee turnover. Gamification relies on the underlying needs by humans to compete. It taps into these primal desires of people, such as the need for reward. The concept has especially been popular in the airlines’ industry. Customers earn points each time they fly. As a result, it encourages customers to travel even more often. With faster internet speeds and faster devices, it is easier to interact with potential customers than ever before. Consequently, it would be smart to reduce advertisement in traditional media such as newspapers, which are dying out. It has been proven countless times that interactive adverts attract more customers to a brand. In addition, it is likely to lead to higher conversion to the feel-good feeling it creates it.