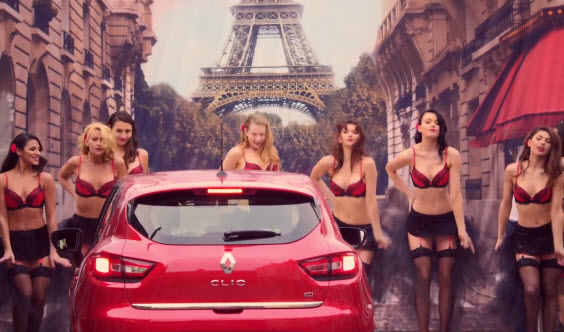 Viral videos. Who doesn’t love them? Marketers and creative agencies absolutely adore them – they’re always trying to come up with the next viral video to get maximum video exposure and ROI. There is no one-size-fits-all formula for viral, unfortunately, but we can learn from viral videos. For instance, the viral videos of Renault Clio’s Va Va Voom, Coke’s Reinvigorating Vending Machine Game, and TNT Belgium’s “We Know Drama.”

Now first off, I want to highlight the importance and relevance of the common denominating lesson these three videos teach: the importance of crowdsourcing. Well, it’s not exactly crowdsourcing – they simply allow people to volunteer (after a fashion) to basically “experience” a marketing message. Now that’s what creative display advertising is. It’s calling the attention of people to voluntarily experience your pitch. Now that we’re established that parallelism, let’s go ahead with the lessons:

The New Renault Clio 2013 has a Va Va Voom surround sound system or something that they thought was worth pitching straight up as an experience that their buyers would appreciate. So they invited a few folks to test drive the new car and experience the Va Va Voom themselves. Here’s the Personalized video ad:

There’s also a video for the women who went for the test drive:

If you notice at the end there, it says “Reignite your Va Va Voom.”That’s pitch right there. But what exactly led to that pitch?

The test drive experience started normally enough, with the sales rep explaining all the little things that make the New Clio a joy to drive. Then he asks the drivers to hit the Va Va Voom button. And then the experience starts. A romantic setting suddenly bursts with eroticism, ending with that pitch: reignite your va va voom.

How do you think that conversation is going to go with the test drivers’ friends?

Instant word of mouth marketing. No sane person would just walk away from that and not mention a word of it to anybody. The lesson here? Drive your message home (pun intended). So you’re saying the Va Va Voom sound system is so immersive you’ll actually feel in love and in the mood – well drive that message home.

If this was a creative ad, the interaction of user and ad would constantly reiterate the pitch not in a nagging way but in a very immersive and engaging manner, just like the way ad says it is.

Coca-Cola has always been a company known for its marketing prowess. They changed the color of Santa Claus’ coat from the boring green and brown to red, for crying out loud. Since then the Coca-Cola colors have been consistently the colors of Santa and Christmas Season. Nobody else can pull that off. But even in simplicity, Coke’s marketing delivers. In this 360 Interactive Video, Coke’s Reinvigorating Dance Vending Machine takes South Korea by storm:

Look at how simple that is. Take a vending machine with a motion-sensor on it, take some K-Pop stars to do the automatic introductions, and let the bystanders and passers-by play. And win, not to mention. They are actually awarded coke cans and bottles for “winning.” Not only do they enjoy themselves, they actually get free stuff.

Simple sure, but underneath this lesson in marketing simplicity lies a wealth of what is actually good targeting. Creative display ads need a lot of that. In this video, coke uses the right mix of elements to draw in the South Korean crowd: a game, K-Pop superstars, and free stuff (everyone likes that). If you can use the right elements in your creatives, you can do the same.

When HQ TV channel TNT launched in Belgium, they wanted to pitch the message: “We Know Drama.” How? By proving it. They set an obvious button in the middle of a boring square and pointed a ridiculously conspicuous arrow down to it with the message: “Push to add drama.” It’s a fairly boring square, so why not?

What happens next is a sequence of events reserved for comedy, drama, and action shows. TNT Belgium proved its point. They know drama.

Now consider this: if your creative ad delivers its message in a way inconsistent with that message or your value proposition or the values your brand purports to promote, then you might have successfully pitched the message, but you also consequentially shot the messenger yourself.

It’s the “how” that was so eloquently executed here, so much so that the “what” was actually improved tenfold by it.

So that’s it. Three viral videos from successful advertising. Three lessons you can apply to your creative ads. Tell us about your next viral creative, won’t you?

Yoni Levy is the VP Managing Director of Digitaland. He has an extensive knowledge and global presence in managing digital campaigns worldwide, and he is a master in building and developing personal business relationships with key people in the market.