Why You Should Optimized Your Mobile Marketing campaign By Vertical ? Optimization in mobile marketing campaigns is key to its success, but as much as dynamic creative optimization is crucial and effective in reaching the campaigns target audience, another important piece of the puzzle is choosing the right ad format, features and call to action according to its vertical.

Choosing the right ad format to match the vertical that is being marketed, sounds like an impossible job, or at least a game of luck, but a recent benchmark released by DG/Mediamind reveals the performance factors behind mobile ads. And not only the ad format used, but using these insights we can find out what is the optimal format and features we should use on a mobile marketing campaign.

First, let’s take a look at clickthrough rates by verticals 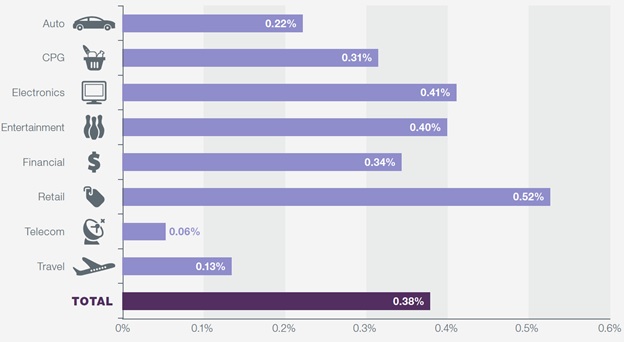 As we can see – retail is the predominant driver in clickthrough rates on mobile, followed by electronics, entertainment and financial services.

Crunching the numbers a bit more and the benchmark gives us an interesting matrix view on the correlation between Ad format, Vertical and interaction rate. 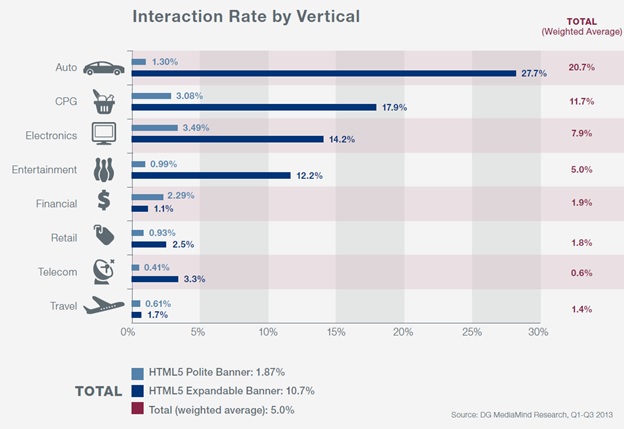 Although panel expansions are summed up into the interaction rate, expandable banners boosted interaction across all verticals, by providing and overlay which can hold additional call to action, video, image galleries and more.

Usage of feature such as image galleries, videos and mapping to allow the users to view and learn more about the advertised car, as well as easily locate the nearest dealership and even book a test drive, by submitting an online form or using a very easy to implement Tap-To-Call functionality to create leads.

Usage of location & mapping as well as weather and a link to download the app from the online stores were important to drive conversions and in store traffic from Rich media mobile ads.

Driving awareness and pushing traffic to store for a purchased conversion,  using features such device accelerometer usage In and ad, and 360 degree interactive product views to allow the user to explore the product prior to its purchase.

By using social sharing, and video to promote the entertainment industry brands, a best practice is to utilize localized and targeted messages, in form of high quality video assets or rich media assets that can promote a product launch or a countdown to a product release.

For the retail advertisers, the brands  promoted in store purchases and traffic, by utilizing mapping and geo location features, weather and call to actions to download the retailers’ proprietary apps

Most financial institutions used the app download functionality with a call to action that showcases the benefit for the user from using a proprietary app, in their rich media mobile campaigns. HTML5 banner animations for brand awareness an impact

In the travel vertical, app downloads; mobile landing page clickthroughs and branded applications were the main driver of traffic used.

An additional use of Dynamic Creative Optimization to tailor a targeted, custom message to a user based on location and other detected criteria to maximize the brands’ message impact.

Pushing awareness to new phone models, and being perceived as always up to date, was the most important message telecom advertisers wanted to deliver. Using image and video galleries and forms to support lead generation and sales.

A location and geo targeting mapping features were used to drive users to in-store browsing.

On all verticals, the usage of video generated more video playbacks on polite HTML5 Ads High impact ad formats compared to expandable banners, due to the fact that the video player is instantly visible to the user and the call to action is clearly seen.

Designing and ad and choosing the right features  based on the brands vertical is crucial to the campaigns success, and reaching its goals.