Building an Interactive 360 Ad: Behind the Scenes (Case Study) 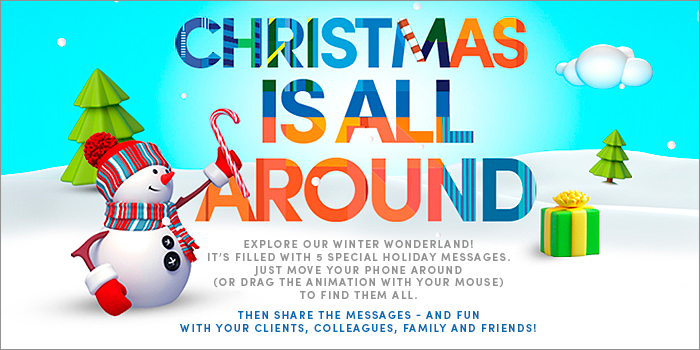 And it’s no secret that interactive ad formats (think ads with games or 360 ads – 360 interactive video) are one of the best ways to build engagement with your target audience, boost brand awareness and drive metrics like click-through-rates, interaction rates and more.

Rich media ads with games or immersive 360 experiences are more likely to grab – and keep – consumers’ attention because they’re interesting and fun. While gamification ads are gaining in popularity (we just wrapped a campaign for Lacoste), 360 ad campaigns are still flying under the radar, presenting savvy brands with a great opportunity to connect with consumers.

We wanted our subscribers to get a better idea of the technology’s potential, so Digitaland developed an interactive 360 holiday experience for 2016. Let’s take a look!

Behind the scenes of a 360 experience

Every holiday card is an opportunity to showcase a brand’s capabilities or build brand awareness. But we also wanted to highlight the capabilities of 360 experiences.

Our subscribers spent an average of 2 minutes per session, interacting with the 360 holiday experience.

Do 360 ads cost more to produce than other rich media ad campaigns?

It’s the most frequently asked question about this ad format. And the short answer is: yes.

360 experiences are resource heavy. They involve converting creative assets into 3D video and 3D animation. Some experiences include audio, too. Syncing up audio with video and animation is a highly-skilled, labor-intensive process. (And many lot of in-house teams and digital production agencies don’t know the best practices for optimizing creative files.)

In this case, production time took longer than usual because we designed our own assets. Typically, our clients provide us with all the necessary assets to move directly into production: PSD files, fonts, audio, etc. We were our clients, so that upped our typical turn times.

Interactive experiences are vital for building brand awareness. While direct response banner ads will always have a place in a brand’s marketing strategy and budget, as consumers become more ad-adverse, it’s increasingly important to produce ads that are both non-intrusive and memorable. Ads with 360 elements or games built into them fit the bill. Brand-building never stops, so use these types of ads early and often!

What are the biggest differences between developing 360 ads and a typical rich media ad?

There’s no question: the time to develop and complexity of the assets. For our holiday card, we kept the focus on short holiday messages and a minimalist ‘winter wonderland’, but the assets were still labor-intensive to develop.

Many of our subscribers are always on-the-go, so we originally planned to produce one experience, exclusively for mobile. While that cut down on production time, we realized it wouldn’t give our readers a chance to see the cross-screen experience. Mobile may be surging but desktop isn’t dead.

Reaching users across different screens and devices requires building out multiple versions of your experience. This becomes even more relevant when you have a complex ad concept, like a 360 experience. The Digitaland holiday card was no exception.

Even so, once we built out the necessary assets and device-specific versions, we were impressed by the compatibility of the experience across all devices. High fives everyone!

The digital display advertising space is getting more competitive every year. But as consumers become increasingly guarded about where they spend their dwindling attention reserves, there’s a clear opportunity emerging for brands focused on the long game.

Our subscribers spent an average of 2 minutes interacting with our holiday card. There was no aggressive call to buy, just an invitation to explore the winter wonderland and its holiday greetings. It was a classic concept (executed well, in our humble opinion) but it highlights the opportunity in 360 ads for forward-thinking brands.

There will always be space for succinct, direct standard banners and direct-response messaging in the digital advertising world. But it’s time to clear the way for interactive, cross-screen experiences, too.